We start with an islander asking how much we spend on groceries per person. We all agree that it’s easy to spend $1000 for a family of 4, even if doing off-island shopping. Buying gluten-free or organic brings up the price, as does having teenagers in the house, who are black holes of food consumption.

Some people have a system for going through the fliers, deciding which groceries to buy at which store, buying sale items in bulk, and freezing them. You need to keep a keen eye out for good prices. Someone once found half a chicken for $2 at IGA.

Others opt to eat less to save money.

An islander who once lived hundreds of miles from the nearest store has great advice. They recommend buying bulk flour and keeping it in lidded buckets, buying whole animals from restaurant suppliers to keep in the spare freezer, foraging berries and canning them, making dandelion wine, tapping trees for syrup and keeping bees for honey, abandoning the structures of capitalism that turn food into a commodity rather than an extension of the very Earth we walk on, embracing our nature as hunters and gatherers, and occasionally supplementing with groceries form Valley Liquidation, a wholesaler in Tacoma.

Perhaps groceries would be cheaper if we minted our own local currency?  An islander shares a link to an article about a town in Massachusetts Berkshires that uses its own unique money called BerkShares. Could we have a Vashon currency that would be accepted at all local stores?

Many of us think it’s a good idea, and one person says they’ve been developing an island currency since last fall and will announce it soon.

I’m mostly excited to see what it will look like, and who will be on it.

And what better way to travel to the grocery than in your own hearse?

Someone asks, “Who is driving around town in this fabulous hearse?” 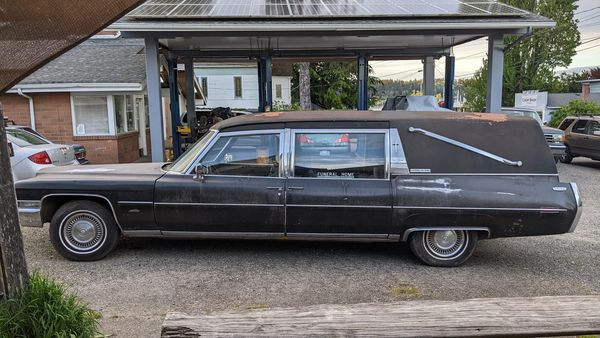 The car is over 50 years old, and the owner bought it about 25 years ago and has been maintaining it. This inspires us to share hearse stories, which leads to the greatest sentence I have read all week: “Back in the mid70s I attended school with identical triplets and they drove a hearse to school each day.”

Please tell me you keep up with them. I need to know how they are doing, what their lives are like, and what they are currently driving.

Another islander shares this macabre memory, “When I was in the Army – stationed in Georgia – one of my platoon mates won an old hearse in a radio station promotion. It became an infantry platoon road trip vehicle, with weekly drives to Panama City Beach FL. Young men + testosterone + alcohol + a hearse. The irony escaped us.”

And of course, after all these lovely stories and everyone sharing their experiences, we get into a 100-comment-deep argument about abortion.

The initial post features a picture of a woman wearing a dress decorated in giant cartoon sperm and holding a sign that says “Mandatory Vasectomies. Life begins at conception.”

What exactly is the woman in the dress getting at? Is she illustrating the differential treatment men’s and women’s reproductive health are given? Is she showing how absurd it is to mandate reproductive procedures? Or is she totally unironic and sincere? Anything is possible.

The first commenter on the picture asks, “Why did we need to see this?” It’s a fair question, as the point, the poster is making isn’t totally clear. But someone responds to this with, “Oh, you poor sensitive baby! The facts of life are too much for you?” Then someone responds to that with, “abortions should start with you.”

So we’re off to a productive start on our discussion of abortion.

The thread illustrates that there are a lot of misconceptions about what abortion is and when it happens, and those misconceptions are used as a cudgel to politclly motivate people. For example, someone in the thread thought that abortion happened right before the baby was born.

So, to clarify: abortion almost always happens when a fetus is too underdeveloped to survive outside the womb. The only time a late-term abortion happens is when the fetus has major deformities that would cause severe pain and very early death.

Some people have been so ill-informed on abortion that they think California made it legal to kill newborns. In reality, California passed a law saying you won’t be prosecuted for having an abortion or miscarriage. This law stems from a situation where women have been prosecuted for such things.

Quite a few people agree, but I have some lingering doubts. First off, what if you don’t want a baby now, but might want one later?

And isn’t the underlying problem that the government is making laws about who can and cannot have which medical procedures?

In the end, someone posts a picture of liquid cement crack filler, and I’m afraid to think how they intend to use it in this context.