What’s the story behind the tire stuck 25 feet up in a tree near the high school? It’s been up there 30 odd years or so.

We suspect it was once the tire swing of a young boy who went off to war (we haven’t decided which war) and never came home.

It is a reference to this meme, which is wholly inaccurate as the bike was left in the 1950s by someone who, to the best of my knowledge, is still alive.

The tire reminds us of other famous betreed objects, such as that one mailbox way up a tree in Frog Holler labeled “air mail” and the half a barrel getting swallowed by a tree off the highway. That one’s been there upward of 40 years. Also there’s the stop sign up in a tree near Burton. And there’s this guy in my backyard:

And speaking of things found in trees, a painted rock hunter found this delicious cranberry-orange scone in Tacoma. 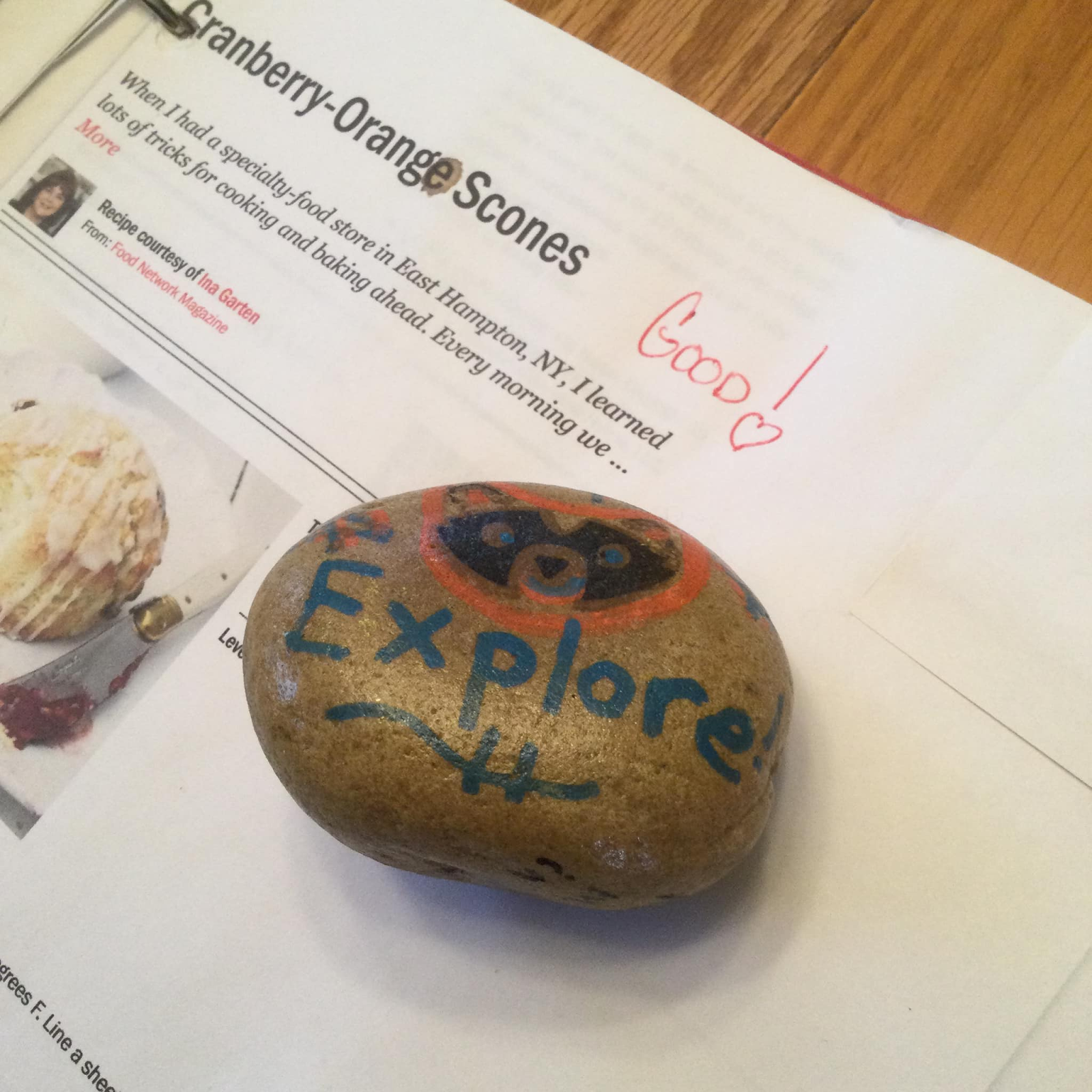 The rock started out in Seabrook in 2018, was rerocked in Tacoma, and is now hidden somewhere in a Vashon forest.

I love the word “rerocked.” I like that people created a word that describes the concept of finding a rock, painting it, hiding it somewhere, then someone else finding it and subsequently hiding it again.

This may be second only to my other favorite word, Rickroll, which means to trick someone into watching a YouTube video of Rick Astley singing “Never Gonna Give You Up.”

We’ve had some instances of mail theft.

Looks like they took the one decent piece of mail (a belated Christmas card) and scattered all the store flyers and ads for window replacement to the winds.

Why would someone steal mail? I don’t even want my own mail, let alone someone else’s.

And speaking of theft, there’s been a prowler.

First off, I’m really impressed that the 2 am prowler going through the drawers on someone’s porch was wearing a securely fitting k95.

The prowler in the video kinda looks like me, and I worry that one day I’ll see a picture online that someone took of me at Thriftway, and everyone will look at it and be like, “that’s the face of a cold, hard criminal.”

A man from France recently moved to the island and is offering to cook you crepes and drop them off at your house . Yes, he can make them gluten free. Yes, he will even come to your house and teach you how to make them.

How come when I lived in Germany it never occurred to me to get to know people by offering to go to their houses and make traditional food from my country? I could have microwaved hot dogs or poured them a bowl of Lucky Charms. Such a missed opportunity.

Someone shared a link to an event at the Yukon Public Schools called Reality Check, and many islanders feel we should bring the event to Vashon. Here’s a description from the post:

“During the event, freshman students are assigned a random annual income before traveling to booths like housing, clothing, insurance, and child care to make virtual payments from their budget. Once they’ve paid their bills, the students who have money leftover receive a KitKat, while those with $0 left in their bank account receive a Zero bar.”

“For extra realism, this event needs various social services booths to help the kids who got assigned lower incomes, or who have families with health needs, etc. etc.!”

This was followed up with: “then they’d have to stay all day to prove that they qualify, or find out that their income is still too high.”

I think we should train high school students to be capable adults by having them pretend to stay on hold with the insurance company for three hours while simultaneously washing dishes. And they only get a KitKat if they find a technician to repair their broken furnace, make a dish for the Scout potluck, and attend the meeting with the department head that just got rescheduled. Also their dog needs surgery.

I wonder if you could win Reality Check by becoming an ascetic with no phone or car who wanders the high school gym with a blank check book until the bell rings and you get your KitKat.

Finally, we have another prowler wearing fur:

Spend a week, or a weekend in the Keepers’ Quarters at historic Point Robinson Park, and experience a truly glorious Read more...
Resident Services
Favorite

Trigg Insurance Agency and NW Ocean Marine Insurance is located at 17425 Vashon Hwy SW on Vashon Island. A valued Read more...
View All Listings
We use cookies on our website to give you the most relevant experience by remembering your preferences and repeat visits. By clicking “Accept All”, you consent to the use of ALL the cookies. However, you may visit "Cookie Settings" to provide a controlled consent.
Cookie SettingsAccept All
Manage consent